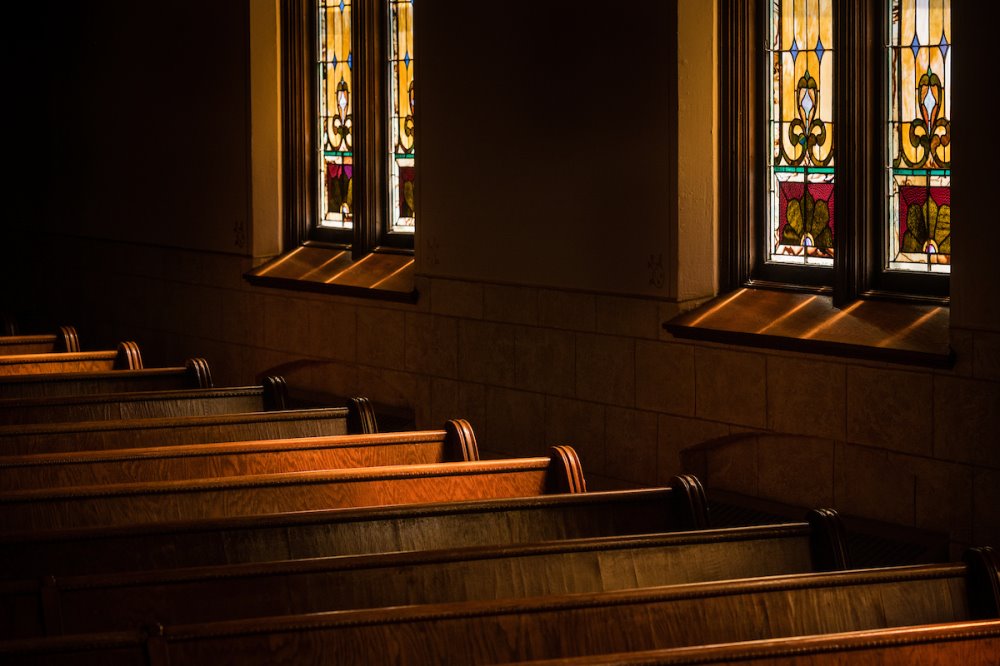 Through fire and flood,
Murders and blood,
Midst sickness and strife,
Pain and loss of life,
In sadness and sorrow
And threats of tomorrow,
To where do we go
When the answer seems no?
You, O Lord, are our Sanctuary.

The Nymph and the Lord of the Dance 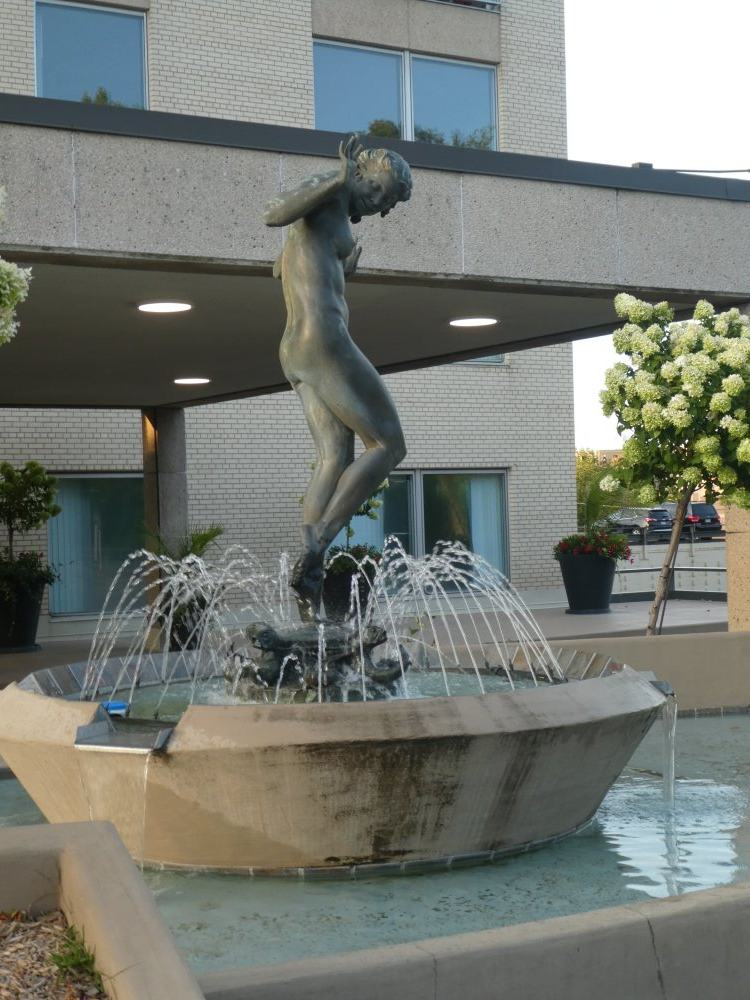 For the past three years, I have admired the fountain at the entrance of West Lake Quarter, our apartment building. Who is this sprightly creature dancing on the water?  Where does she come from? What is her playful message? I investigated and discovered a story that is as fascinating as the nymph herself.

She was sculpted by Harriet Whitney Frismuth (1880-1980), a well-known artist who studied with Rodin in Paris. Later at her studio in New York City, she created dozens of bronze nymphs for patrons all around the country, including Como Park in St. Paul.

In 1925, public utility magnate Wilbur Foshay commissioned Frismuth to fashion a fountain sculpture for the courtyard of his grand Foshay Tower in Downtown Minneapolis. The artist used her favorite model, Desha Delteil, a professional dancer for thirty-three of her figures.  Like a centerpiece on a wedding cake, the fountain stood for years enjoyed by fashionable diners and dignitaries in the tallest building between Chicago and the West Coast. The nymph was a pleasure to be around. She exuded positive energy.

When Foshay Tower's open courtyard closed, the traveling nymph was moved to Charlie's Cafe Exceptionale in downtown Minneapolis where she attracted visitors from all over the world. At the closing of Charlie's Cafe in 1982, the Robert Short Family purchased the bronze water fairy for the porte cochere of Calhoun Towers, their twenty-two story apartment building in the Lakes District of southwest Minneapolis.

The bronze statue is entitled "Scherzo," an Italian musical term that denotes a light, fast, and playful movement of a musical instrumental composition. Obviously, she has that aura as she appears to be dancing weightlessly on top the water with her hands raised in pure delight, the opposite of many statuary figures that seem anchored to the ground. Instead, she radiates innocent beauty that lifts the spirits of the beholder and says, "Why not?" to human dreams.

Water nymphs originated in Greek mythology thousands of years ago. Nymphs are fairylike minor goddesses that inhabited forests and bodies of water. Those that are fountains and springs are called Niads. Those that live in the sea are called Neriads; they mysteriously appeared to guide sailors through the dangers of the sea.

When one stares intently at the ocean for long periods of time, images may appear on the water, especially when the rolling ship mesmerizes the mind with its constant motion. The reflection of sunlight on water distorts images. Sailors on watch are advised to take breaks from their vigil lest they give false reports.

In our modern age, "reality" is based upon the scientific method; we shun the ancient stories of mythology. They seem like "fairy stories" fitting for the whimsical minds of children. "How could adults actually believe such myths?" we wonder.

Maybe, just maybe, that is why the ancient nymphs attract a barren spirit. In these delightful and playful creatures, we can find respite for our weary souls. They speak to us of something we have lost and something we desperately need.

The incredible Good News is that we do not have to resort to myths in order to sooth our wounded souls. As a matter of fact, two millennia ago the Creator entered our universe as a human being and delivered us from myths that bind us to earth.

And that, my friend, is no myth but a fact of human recorded history. That is what lifts our spirits, brings us joy and genuine hope.

He walked on the water, was executed and defeated our ancient enemies of fear, death, and the power of evil.  He rose from the dead and became the Lord of the Dance, the Giver and Preserver of Eternal Life.

When I began my ministry as a chaplain in 1970, I had no seminary training in the field of corrections.  There was no prison chaplain's textbook to follow. My "boot camp" had been at Lincoln Boys School where I was a chaplain for teenagers adjudicated delinquent (1970-1977).

At Green Bay's Wisconsin State Reformatory (1977-1999), I was called to be a chaplain to inmates serving sentences from 10 to 30 years. In fact, some of the boys had "graduated" from the Boys School to the adult prison!

I had as much to learn as a chaplain as the inmates did about finding a new life. We actually learned together. After all, we had the same Teacher and the same Textbook.

I learned the following lessons while pastoring young men who had been convicted and sentenced for serious crimes:

That was the general framework of my ministry. I experimented and refined the process over the years, learning from my mistakes and misjudgments.  Chaplains in other Wisconsin prisons used various methods in their chapel programs. Each chaplain followed a pattern of ministry that worked best in a particular institution.

Context is primary in prison ministry. We learn to work within the rules and conditions that prevail. The Security Department usually has the last word.

Did it work? Not for every inmate. Some backslid and fell away. Others flourished like tender plants in a greenhouse. They amazed me with their zeal and childlike faith. Many continued active after they were transferred to other prisons. A few eventually became pastors in community churches. Chaplains do a lot of "seed planting" that others harvest.

A chaplain in a state prison is expected to do many other things such as helping inmates through personal crises like deaths in the family. They also coordinate the spiritual needs of Muslims and Native Americans and are responsible for weekly chapel services for the general population.

As I reflect back on my life, I am grateful I was called to prison ministry. It was the opportunity of a lifetime to make a significant difference in the personal lives of many people who are considered "the least of these my brothers." Finally, it is to "the least" that the Kingdom of God is revealed. 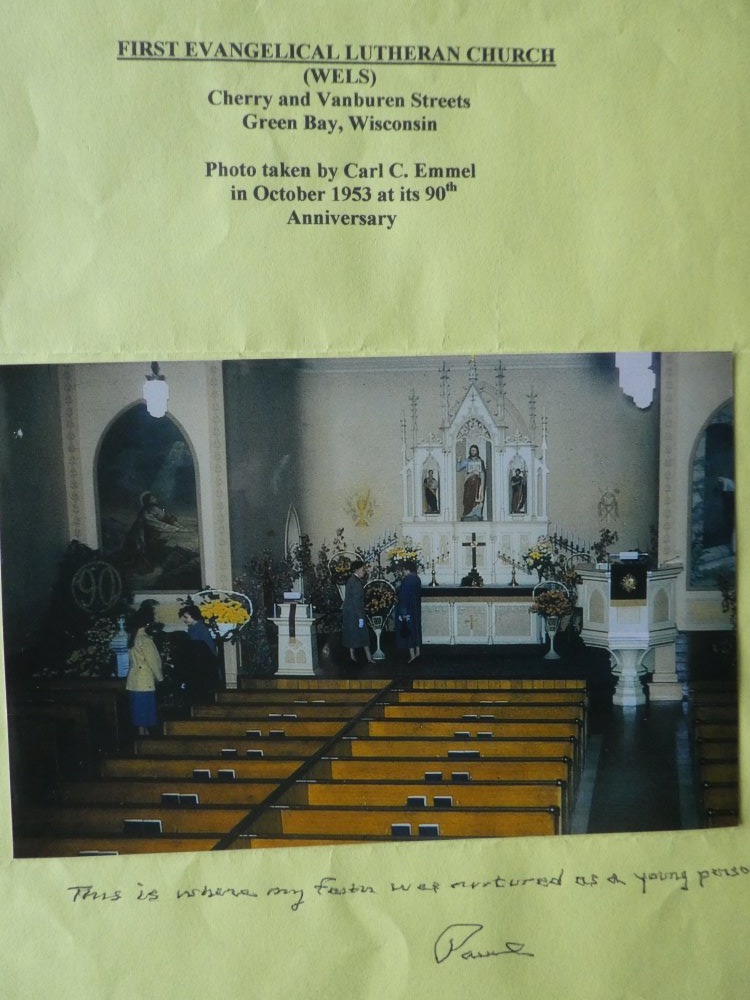 Childhood religious experience runs deep in the soul.  Positively or negatively, early church experiences are deeply imprinted. They remain with us for the rest of our lives.  Mother Church, with all her human flaws, provides the genesis of faith.

I am grateful that my early church experiences were overall positive. They shaped my faith and life as a child and later into adulthood. I acknowledge that many young people do not have similar positive experiences. The faith life of many children becomes aborted. Church, like a childhood story, is long forgotten in later years.

Early memories of sitting in a pew, singing familiar hymns, watching ushers, observing people taking Holy Communion, listening to the pastor lead the liturgy and preach from the pulpit, the creaking wooden pews, the offering plates passed down the row, elderly organist Mr. F.C. Witt, the choir singing behind on a platform, the old stained glass windows, the aroma of Easter lilies, the magical Christmas trees, the church bell tolling before the service: all these memories form a poignant collage.

Two large wall mural paintings graced each side of the chancel. One of Jesus praying at the Garden of Gethsemane; the other of Jesus knocking on a door. As a child, I wondered at their meanings. Why was Jesus praying? Why was He knocking at the door? What was He thinking?

As a boy, I did not fully understand what was being said or sung. Often my attention drifted elsewhere. Sometimes I would get lightheaded and have to sit down to feel better. Once in a while, I would attend German service with my father because it was only 30 minutes long. He would keep a strict eye on me beside him.

When I became a teenager, I preferred to sit with other boys in the front pew rather than with my family. Our behavior was well monitored by the entire congregation. We were there Sunday after Sunday. No questions asked. It was what we did.

I believe that during those formative years, The Spirit of God was seeping into my soul, nurturing the embryo of faith embedded at my baptism, April 18, 1937.

The miracle of faith cannot be analyzed and explained in human terms.

It is a wonder that the tiny seed of faith continues to grow and becomes a tree of life in which the birds nest.

Many young people today are growing up without the implanted Word of God. We now have entire generations who never experience the miracle of faith. For them, life is what it is, a succession of events with no ultimate purpose, a play without a plot, a story without an author.

Perhaps, in His wisdom, God is preparing new ways of bringing young people to faith, ways that we cannot now imagine. For those of us who believe, however, we can be grateful that the seed once planted by Mother Church, still lives and grows.

Truly, faith once conceived is nurtured by Word and Sacrament in the womb of Mother Church. Long may she live!